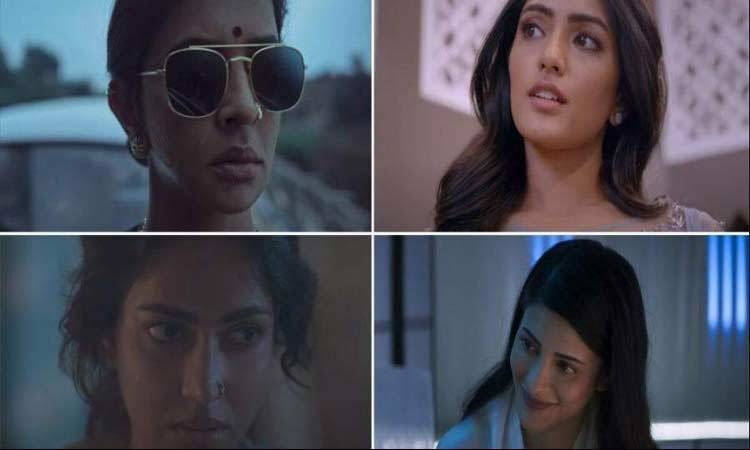 Looking at the anthologies coming up in OTTs in both Hindi and Tamil, four prominent Telugu directors ran to prove that even Telugus can do the same. In fact, the popular OTT company Netflix may have inspired them to do so. Even the budget constraints may not be as large. Attempts have been made to make this anthology somewhat grand. This is commendable. But if you look at the ‘quail stories’ made by these four famous directors, it is boring. OTT tried to fill the audience with interest with somewhat bold scenes and dialogues. If you look at these, you will see Chandam looking at the tiger and the fox biting him.

‘Ramula’ is a story written by Tarun Bhaskar who received a national award with his debut film ‘Pellichupulu’. A love story between the son of a political leader in a rural Telangana and a street girl. The story of a woman leader who used the gap between these two lovers as a ladder for her political purposes is also very crucial. Manchu Lakshmi played the female leader. Being a person who has a good grasp on Telangana politics and language, Tarun Bhaskar narrated the story in this context. However the episode of ‘Rams’ is disappointing for those who expect something new from him. Because he screened entertaining ‘wedding looks’ in his own style on a silver screen with many limitations. Out of the box movie ‘What Happened to This City’. For those who think that Tarun Bhaskar will try something new and something different in the anthology he is doing in Telugu for the first time in OTT, ‘Ramula’ will be left disappointed.

Nandini Reddy, who came to Telugu as a director with a romantic entertainer like ‘Ala Mudaliindi’, created the episode ‘Meera’ with this anthology. Living with a suspicious husband is like traveling on thorns for a wife. Many women in this society live in compromise with such suspicious husbands. However, in this case, Meera’s behavior is similar to that of her husband. She acts to strengthen her husband’s suspicions. But the climax is what Meera did after her husband’s suspicion crossed the line. Nandini Reddy took a unique point and dealt well. But one question arises as to how many will agree with the solution she has shown. Jagapathibabu and Amalapal act as husband and wife. The most sensible of these four stories is ‘Meera’ by Nandinireddy.

Naga Ashwin is the director who made a thought provoking movie like ‘Evade Subrahmanyam’. He also received national awards for his second film ‘Mahanati’. The episode he created was ‘X Life’. Naga Ashwin has chosen the storyline of the future but it has nothing to do with this generation. With the help of technology it became as if something had been shown to be wanted. Especially since Shutrihaasan starred in it which means we expect something. We hope that Naga Ashwin will get the acting he wants from a star heroine. But her conversations are a situation of no real meaning. This ‘X Life’ proves that there are not many lip locks in OTT that are not suitable for the sensor. On the whole the climax to the time accustomed to this confusion comes and brings relief.

Young director Sankalp Reddy got national recognition with his debut film ‘Ghaji’. The episode he directed was ‘Pinky’. It is the story of people who can’t give up old bonds even after getting divorced. This is not to say that such incidents do not occur in society. But most of them are rare cases. It is not right to generalize to them and show them the same love. Sankalpareddy does not seem to express his innermost thoughts or the concept written on the paper as convincingly as he thought. On the whole it also resembles Half Cooked Meals.

Truth be told, it is doubtful whether those who overestimate the anthology of ‘aphorisms’ are wrong. The first mistake is to look at the two or three recent anthologies in Tamil and see how the respective directors have taken them with conviction and hope that their grandchildren will follow suit. These four popular directors who are passionate about movies are showing that they have not shown all the dedication to make this anthology. Curious to see the first anthology that came in Telugu, one can watch ‘Pittakadhalu’. But after that there is no point in spreading the word that time has been wasted!