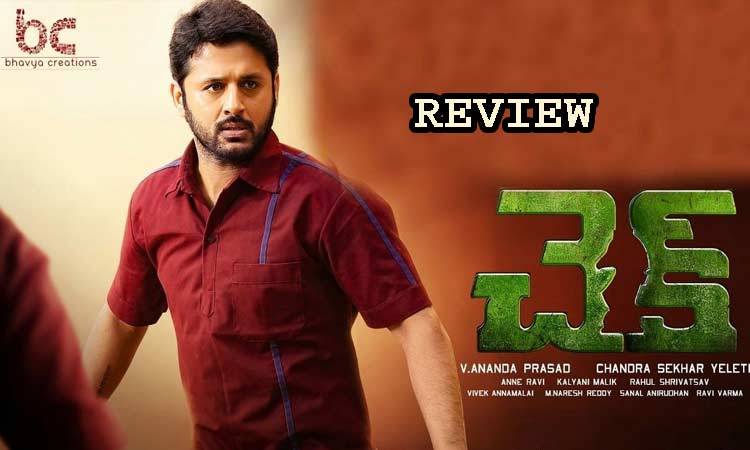 The movie ‘Bhishma’ which was released on February 21 last year has put Nitin on the success track. After that the movie stopped going to the super hit range as the theaters closed due to Corona. But before that, Nitin gave the green signal to several films. In fact, if all had gone as planned, three or four films starring Nitin would have been released last year. But the corona struck. That’s all there is to it now. The first film in it was ‘Check’. Director Chandrasekhar Yeleti has been making films in his own style since his debut film ‘Aite’. For the first time in the Nitin-Chandrasekhar Yeleti combination, the film ‘Check’ was directed by Bhavya Creations head V. Built by Anand Prasad.

Aditya (Nitin), the terrorist responsible for the death of 40, is hanged for the story. He vomits as if he has been imprisoned for a crime he did not commit. Lawyer Manasa (Rakul Preet Singh) proceeds to argue on behalf of Aditya. But Aditya literally drops out of the case due to the inconsistency in the incidents mentioned in the case of his girlfriend Yatra (Priya Prakash Warrior). The rest of the story is about how Aditya got out of the prison walls with the help of chess champion Srimannarayan (Saichand) who was introduced in jail.

Chandrasekhar The general audience has the impression that any film is something special. Accordingly, this time Chandu chose the jail drama. It is interesting to note that the hero resorted to chess to erase the impression of being a terrorist, and to win step by step and become a grandmaster. The director created some scenes that were interesting rather than make the audience feel bored as the story stretched between the prison walls. Pictured love track on the hero and heroines, the song shot on the beach gives a nice relief to the audience in the first half. Similarly the hero characterization is also different to the routine. The movie continues with the prison and court drama when it comes to the second half. Director Chandu said that the film will not have an ending in a way that the audience could not have imagined. In fact, when it comes to making thriller movies like this, directors are not so logical. Some scenes like that are far from natural. Judge Gary’s granddaughter plays chess with a terrorist on the court premises! No longer is the connection between the main characters even stronger. Nowhere is the director as convincing as to why one works for the other. We keep seeing the tempo of the film drop here and there. In the second sense it is too much. The fight scenes are also too long and irritating. It would have been nice if the attention shown on the action scenes had been shown on the story by the director.

And when it comes to the cast, it’s definitely a different role for Nitin. He played it nicely. Maintained that mood from the beginning to the end of the film. Priya Prakash Warrior has less screen space. But she did not look good with her first Telugu film. Rakul Preet Singh’s character was a bit dull at the beginning, but was a mainstay for the film in the second half. Rakul played the role of Posani Routine as a father. Saichand as chess master, Murali Sharma and Sampath Raj as jail officials; Harshavardhan, Simran Chowdhury, Chaitanya Krishna have done well in other lead roles. Rahul Srivastava’s cinematography is good. Bhavya Creations has prioritized architectural values. Contrary to the routine on the whole, no matter what Chandrasekhar tries to do with the ‘check’, the feeling of something missing is felt by the audience coming out of the theater. The film has become a commercial hit and if there is a sequel to it, we have to see if the deficit will be met.
But… Over All ‘Check’ is a one time watch movie.